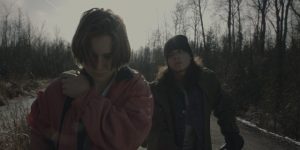 A bullied child runs into his tormentors on the road, as he takes his time things turn and become rather grim.

Written and directed by Ashlea Wessel, this short shows that she consistently creates powerful pieces no matter the themes or the length. Here, she takes on bullying and gives her lead something more than just a basic case of it and a basic outlet for it. Going any further in this information would be doing the film a disservice. Her work, as usual, shows talent and mastery for storytelling through images and characters who have very little screen time to leave an impression. And an impression do they leave here. Carefully written and directed, Weirdo brings bullying to the screen in a careful, calculated, and caring manner.

Playing the titular Weirdo is Spencer Hanson who brings to the screen a performance that will remind those who have been bullied how it felt. His emotions, his physical responses all come with the power of bringing back memories for those whose childhood was not ideal and perfect. His work carries the film and makes it more effective and powerful. Playing his bully is Shawn Vincent, bringing the right amount of mean to the part, but also showing a little something extra that comes in handy when things take a turn. These two give the top performances of the film, but the rest of the cast is also great, everyone being on point as the teenage stereotypes (for lack of a better word) they embody.

This all happens in front of the watchful camera of cinematographer Mark J. Pragai who doesn’t flinch or get away from the action, or the harassment, showing exactly all that needs to be shown and helping create an uncomfortable experience for the viewer. This is something that is needed here, this film should be uncomfortable at times and it should be as it is, showing all the torment and sadness, showing what a bully does to their chosen weirdo.

Weirdo is a powerful short, something that is a habit for Ashlea Wessel’s work, that will hit some viewers right in the feel and will make others think. The subject of bullying is a hard one to take on and here it’s taken on in just the right way. Quality writing, directing, acting, cinematography, editing, music, and more make this short of the must-see short films of this festival season.