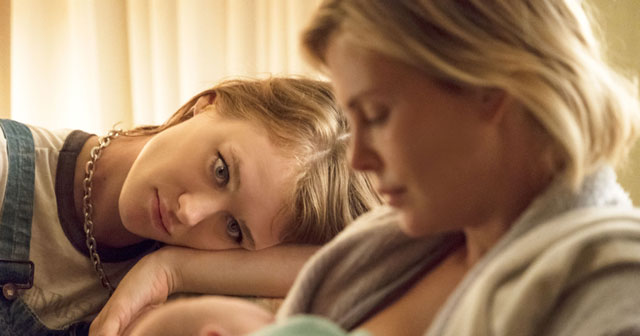 2018 was filled with rich dramas and comedies about parenting and parents, and “Tully” is probably one of the best. Director Jason Reitman has gone about developing some of the most unique and interesting tales of femininity throughout his career, and “Tully” is one of his best. It’s a film that certainly begins on a note that many people will assume is nothing but a sub-par set up for a pretty okay drama. But then “Tully” becomes just so much more and ends as a testament to motherhood and the way post partum depression can affect women.

Marlo is a New York suburbanite who’s about to give birth to her third child. Her husband, Ron, is loving and works hard, but remains clueless about the demands that motherhood puts on his wife. When the baby is born, Marlo’s wealthy brother hires a nighttime nanny named Tully to help his sister handle the workload. Hesitant at first, Marlo soon learns to appreciate all that Tully does about motherhood and her life, and the two soon form a bond, forcing Marlo and Tully to examine their own lives.

Jason Reitman’s tale of an overworked mother who has it all, but also wonders if she have had something better is often compelling. Even better is that Reitman and writer Diablo Cody never punish main character Marlo for questioning her life, and trying to figure out if maybe there is another life out there she could have led that could have offered different fulfillment. There’s nothing wrong or inherently mean about the way Marlo begins to take a second look at her life, and writer Diablo Cody presents the narrative with a wonderful subtly that makes Marlo so utterly fascinating and tragic. She has a seemingly ideal domestic life that many people would love, and yet she has to stop and wonder if she ever really wanted it.

Once Tully enters her life, she begins to present Marlo with something new, something that can offer her new perspective on her domestic situation and her marriage as a whole. Charlize Theron’s turn as Marlo is fantastic as she perfectly portrays this overworked and under appreciated woman who is at her wits end, all the while Mackenzie Davis works wonders in her supporting performance as Tully. Davis’s character is that kind of woman that Marlo wants to be, but soon it becomes a dilemma of choosing to emulate Tully, or adhering to her family life and trying to build her own happiness along with her children and husband. “Tully” is a sweet, touching, and surprising dramedy with Jason Reitman setting the focus on the relentlessly grueling job of motherhood and the toll it can take on even the most content woman.