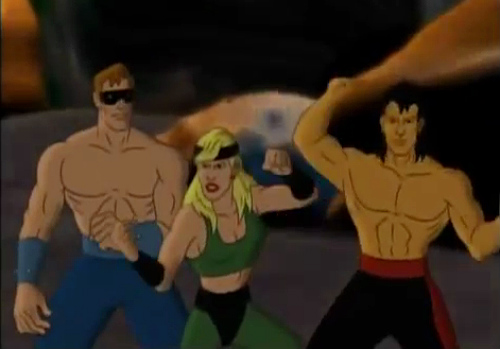 The first time I ever saw “Mortal Kombat” was in 1992 when I stopped by a grocery store on the way to school and saw a pair of guys battling one another on the arcade cabinet. Though “Street Fighter 2” was huge, “Mortal Kombat” made its own waves by realistic character models and some of the most vicious video game violence ever conceived in its era. So came the 1995 movie where not even then was there this much babbling about supernatural forces, and tournaments. “The Journey Begins” works overtime to build a mythology from this simple video game, and fails big time. It feels like someone at Threshold Studios were alerted about the upcoming movie and only had about two weeks to build a respectable animated tie-in.

So they instead loosely followed the narrative of the Paul WS Anderson movie and tossed in a bunch of really awful animation that they sped through. “The Journey Begins” is a baffling mix of computer animation and 2D animation, mashing both together in this awkward stew of nonsense. One moment the poorly drawn stiff 2D characters of Johnny Cage, Liu Kang, and Sonya Blade are on a pirate ship, and the next moment we’re watching really bad 3D models of Sub-Zero and Scorpion doing battle in a past tournament. When the 2D animation is on screen, the animators provide terrible effects to add dimension. Rather than shading and shadows, they simply give the characters an awkward bevel effect that blurs the characters every time they’re on screen or in motion.

This isn’t just distracting but yanked me right of the goofy narrative. The mythology the writers hastily unfold doesn’t make a lot of sense, as we learn that the outerworld has won nine Mortal Kombat Tournaments, and winning a tenth will allow them to take over our world. So why exactly does it take ten whole tournament victories for them to enter and conquer? When the trio of heroes isn’t bickering with one another, they do literally nothing but walk around an island with Rayden, who explains and explains, and explains, and extrapolates everything about Mortal Kombat. Forget tactics, and strategy, we have to learn about the ancient competitors of the tournament, and of foes like Goro.

We don’t have to learn how to conquer him, just that Goro exists, and that’s that. “The Journey Begins” is supposed to tie in to the movie, but it has very little to do with the actual movie, beyond featuring characters from the live action film. There doesn’t seem to be any effort to connect both properties, and it feels so much longer than it actually is, in the end.