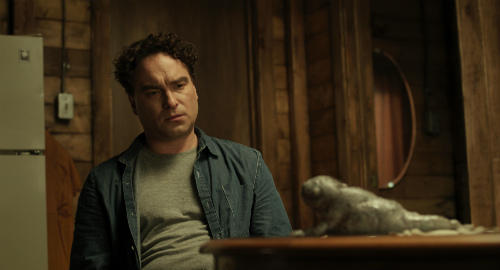 In the hope of letting go of the past and of heartbreak, Paul goes on a retreat where he undertakes a “master cleanse” that cleanses him of more than just toxins. Writer/director Bobby Miller creates a film that is equal parts drama and comedy while having some fantasy and horror elements.  The way he mixes both works very well here and he manages to reach that ideal balance between both while creating a story that is good and well developed.  The characters he creates are relatable and easy to care about, especially the lead.  His characters, the leads in particular, are people with issues and needs to be accepted and to move on with their lives.  Of course, the situation they find themselves in is a bit ridiculous, but the way it’s written makes it work.

These character fall for a cleanse that is supposed to rid them of everything negative in them and it does not cost them anything.  As it too good to be true, surprises pop up along the way.  The film adds these in in a manner that they almost make sense at first, and then the viewer can simply accept the fantasy element and move along the story with the leads.  The fantasy element is well written into the story although not fully explained, which works in its favor.

The lead here is Paul, a man who is heartbroken, living in a crappy apartment, and seemingly at a dead end in his life.  When he sees the infomercial for Let’s Get Pure, he decides to give it a try as he has nothing to lose.  This part is played by Johnny Galecki, playing him as an awkward man who just needs something to go his way to give him some hope to hang onto.  He plays him in a way that makes the viewers forget that they see him as the same character so often and that to some, he is Leonard on The Big Bang Theory.  He gives a sad performance that turns sweet as the film advances.  His character’s arc is decent in the short time that he spends at the retreat.

Playing opposite him in a lot of his scenes is Anna Friel as Maggie, a character that starts off rather unlikable and then becomes more likable, and then she goes back and forth a bit for this reviewer.  Her performance has some charm in the right spots and she does give good counterpart to Galecki.  A surprising presence in the film is Anjelica Huston as Lily the lady who runs the retreat while the man behind it makes his way there.  Her performance steals the scenes she’s in as she usually does.

The fantasy element, without being fully spoiled, is damn right adorable.  Those things are great, well design, and very well made.  Special effects supervisor Barry Hebein with special makeup effects technician Shelagh McIver and mold maker Michael Nickiforek, and effects lab artist Sarah Pickersgill pull off the cutest things this side of Jim Henson.  Their work looks fantastic on the screen and it shows great talent.  This work is helped the talented puppeteers behind these things, Nicholas Podbrey and Matt Phillips.  Their work all together creates great effects and creatures.

The Master Cleanse is a drama/comedy that brings elements of fantasy and horror to great results.  The fantasy element is brought to the film by the cutest little beings that should make anyone with a heart and love to prcatical effects fall in love with them.  The adorable factor teamed with good performance, an appearance by Anjelica Huston, and rather relatable characters create a film that is quite enjoyable to watch.