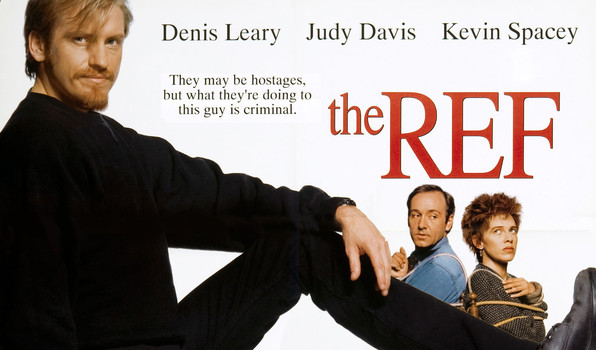 It’s only fitting that a comedian so devoted to working against the norm would star in a Christmas film that’s very much against the idea of the holiday. “The Ref” is very much a hilarious and laugh a minute dramedy about familial dysfunction and the idea of Christmas being much more of an obligation than a time to celebrate the loved ones and family.

Leary gives a great performance as Gus, a petty thief who breaks in to a local mansion and is caught red handed stealing jewels. When he narrowly escapes the police, he takes a married couple hostage. Little does he know the married couple Lloyd and Caroline, are on the brink of divorce, and are perpetually at each other’s throats. Gus proceeds to hold them against their will and finds the punishment more severe than an arrest, as Lloyd and Caroline literally drive Gus to the brink of insanity, as he awaits a call from his accomplice for a getaway. “The Ref” succeeds in being a hilarious and insanely raucous dark comedy that really plants star Denis Leary out of his element.

As Gus, he’s a worn out and fed up criminal who has to endure the doldrums of suburbia, all the while doing everything he can to tolerate Lloyd and Caroline’s incessant arguments. Leary really injects his brilliant comic timing in to the role, implementing his trademark rapid fire speech and incessant swearing to cope with the stress of the arguing couple. Kevin Spacey and Judy Davis are only a few of the excellent performers in the group of dysfunctional characters. Davis and Spacey garner fantastic chemistry as a couple with a lot of problems so involved in their own squabbling they can barely muster up the terror from Gus who stands angrily with a gun pointed at them. The situation becomes even funnier when Caroline’s family arrives for Christmas dinner, and Gus has to pose as their therapist.

To his shock, Caroline’s family is even worse than the dueling couple. Glynis Jones is great as the passive aggressive Grandma Rose who lords her money over her family and manipulates those around her, while Christine Baranski really shines as Caroline’s overbearing sister in law. “The Ref,” though, really belongs to Leary who is given almost carte blanche to rant and rave as he pleases, and portrays Gus as a flawed individual whose own volatile personality and short temper becomes a consistent source of wild laughter. “The Ref” is really an underrated Christmas film that works for folks that want to avoid the saccharine traditions and appreciate a genuinely hysterical anti-holiday comedy.